click on images to view photo and film locations of cafes, hotels and entrance halls in Berlin 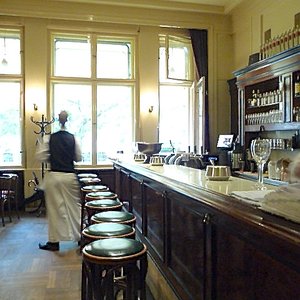 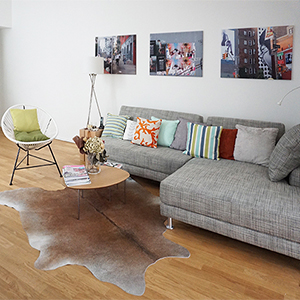 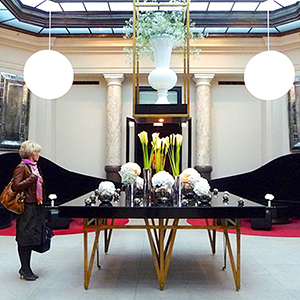 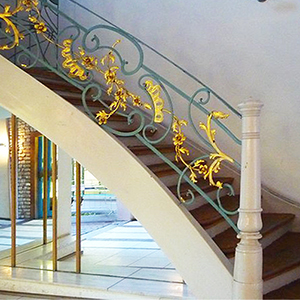 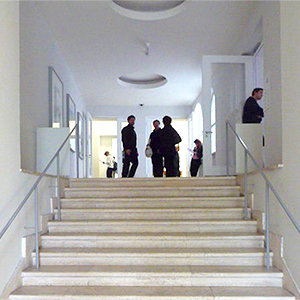 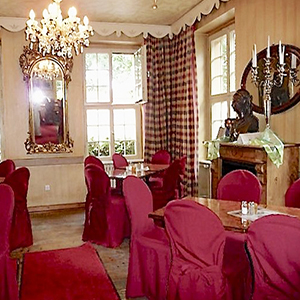 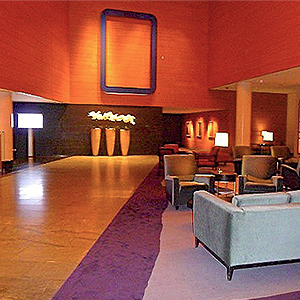 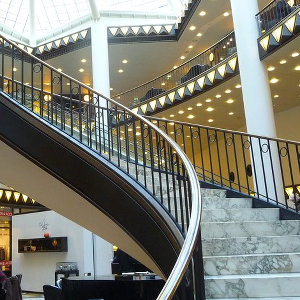 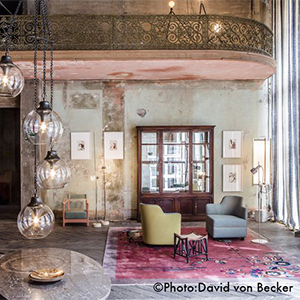 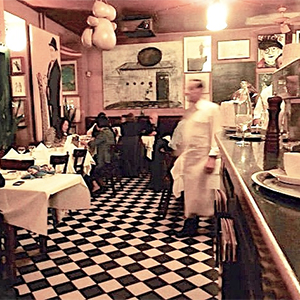 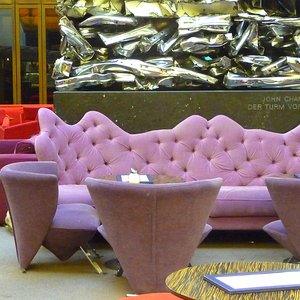 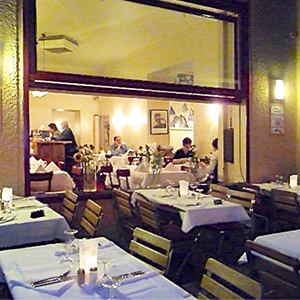 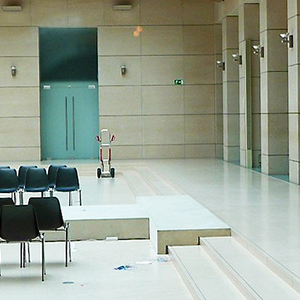 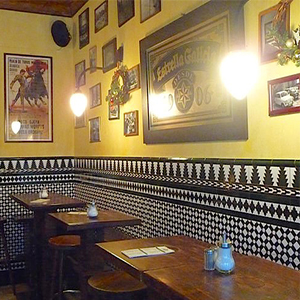 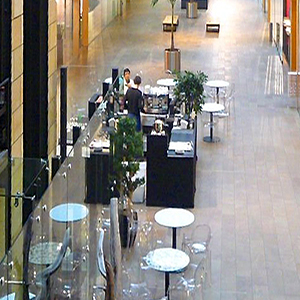 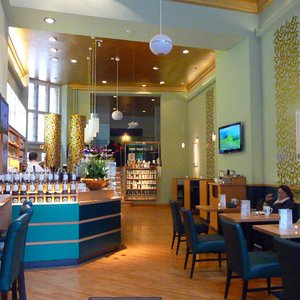 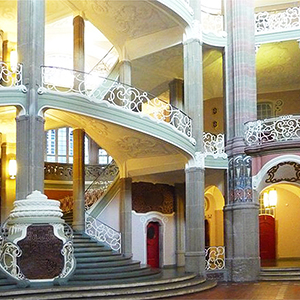 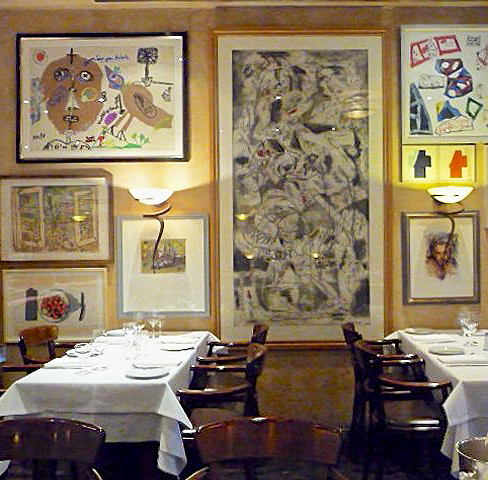 Berlin interiors of diverse house, hotel and dining locations for photography and film

Interior locations in Berlin are as diverse in styles, textures and time periods as its exterior architecture and the city itself.
The eclectic mix of old and new interior decoration blends different design styles together to these unique Berlin indoor spaces, that are present in many restaurants, cafes, dancehalls and hotels. Design savvy aesthics refer to it as this typical Berlin interior design style. In interior design language the adjective ‘eclectic’ means the mix of decorating elements from different time periods, styles, textures, ethnic backgrounds and/or anything that doesn’t fit into any popular interior design language terms.
Interior decoration that is called ‘eclectic’ can be a very unique interior architectural melange turned ‘piece of art’ with carefully selected, but unusual color schemes, new or vintage furniture from different decades that in the end form a harmonious architectural design. But it can also be a chaotic mix of styles, decorating materials, paints and time periods that are thrown together - this best describes the commonly also known as Berlin shabby-chic style.
No matter which one you need for the decor of your film set or photo shoot, Berlin is full of this unique eclectic interior locations for any media industry production, be it a high fashion editorial shoot, or an artsy TV commercial or a movie production - our location scouts will find it somewhere in or around Berlin.

Architectural design terms that are used a lot in connection with Berlin, are the words eclectic, mix and most of all the word ‘patina’ which describes a thin surface layer that develops on walls, floors and textiles because of extensive use, age, or chemical reaction. When we talk about interior decoration with patina at this point, we refer to Berlin film locations that represent a fabulous combination of former glory and the merciless tooth of time that has worked on old walls and paints on those interior decorations. Nowadays many of those old Berlin architectural venues show a combination of the original raw ceilings and unplastered walls with modern furniture designs and creative decors. Patina and signs of the past are artistically combined into new and innovative design concepts and are now a rare design element of its own.
In the former East Berlin and its surrounding region, there are still numerous once grand mansions, manors and smaller castles that had been left by their owner and came under government ownership. That’s when they started to rot, as there was never money invested to keep them up or to restore them. Nowadays there are still quiet a few around with lots of patina, and that’s where photographers and movie directors like to shoot their film and photo productions for high fashion editorials, commercial shootings and film productions.
Very rare and unique interior architecture with patina are also old and since a long time not in use public indoor swimming pools, hospitals, government buildings, factories and train stations. There are not many places in the world where as many of these locations can be found than in Berlin and its surrounding region.
Many of those buildings had been restored to their original glory, especially the famous palaces, castles and manor houses, as well as old theaters, opera houses and government buildings. They have undergone a complete restoration and emerge now in their former beauty - the interior spaces as well as the exterior architecture.

Modern interior design of the Berlin Bauhaus style is the opposite of eclectic interior decoration.
Yet it is another milestone when it comes to Berlin architecture and design.
A group of German designers had started the BAUHAUS SCHOOL in 1919. Their modern design rules are the basics of what we still consider ‘modern design’ nowadays. Their strict design philosophy is based on ‘form follows function’. There are no unnecessary decorative elements in their furniture designs nor in their interior or exterior spaces. The characteristics of those modern style designs are the straight lines, the simplicity and the high quality of materials, either wood, or steel or leather or combinations in black, white or mute colors. Berlin has still quite a few buildings and private houses that are built in accordance with the Bauhaus guidelines. The original BAUHAUS furniture are exhibited in design museums and some selected stores in Berlin, but several modern design furniture factories in Italy and Germany mostly, still fabricate their design collections in accordance with the Bauhaus design and offer high quality copies of those modern classic design items.
Those are used a lot on film sets and for photographic productions.
Variations of the modern design are the minimalist designs based on the Japanese tradition with focus on the bare necessities in furniture and shapes as well as the classic interior decorating designs where the shapes are simple, but high but elegant high quality materials play an important role.

Contemporary design interiors are sometimes confused with modern designs, but whereas modern design is always clean and has strong geometrical shapes based on the Bauhaus rules, contemporary interior design describes the look of the moment, the so called trendy look, which can be anything from modern clean styles to intensive color explosions and wild shapes like Memphis design that originated in Milan, Italy in the 1980th, to baroque-like bombastic shapes and floral textiles. Currently the contemporary design style is close to modern style with clean shapes and neutral colors and no clutter, but it is in the process of changing to a more bold color scheme and roundish shapes arranged in asymmetrical balance. As Berlin has so many new modern building constructions, it has also a huge selection of exceptional modern and contemporary interiors for film and photo locations.
Berlins film industry started around the same time when the glamorous Art Deco design style was developed around the 1920ies, with focus on expensive materials like chrome and high lacquered woods in combination with bird’s eye maple and bright primary colors.

Urban interior design is the style of the very moment, combining modern design elements with industrial materials ike stone, concrete, raw metal and exposed beams and brick walls. It’s the Berlin interior styles that quickly turned from old factories, and run down official buildings into dance halls and upscale restaurants and cafes. They can be seen in many Television productions of crime dramas, as well as in high fashion photo shootings. But apart from the cool urban style, there are many interiors in and around Berlin that are still standing for the cozy warm homey traditional country style look. It comes in diverse styles from toned down simple family homes to the interior spaces of traditional old mansions and ballrooms of historic palaces.

Berlin offers a wide variety of interior locations for film and photographic shoots, from the cool raw urban style to sleek modern and contemporary decors with variations of minimalist styles to the warm German country look to fantastic bombastic historic interior spaces or eclectic interiors with more or less patina.
In our Berlin interior location archive we do have a comprehensive image selection of various architectural indoor decorating styles. According to your film, video or photographic project, we will select a series of interior location photos for your media project, or we will scout locations until we have found the indoor location that will work for you motion picture or stills shoot.